Well folks, I have taken a stand. I have decided to take back my children. I knew that it was going to be ugly. I knew that it was going to be a battle, but I decided that my kids were worth the fight.  What am I fighting??? It is a battle against electronics. It is a battle against video games. It is a battle to give them a childhood that involves imagination, creativity and thinking about something outside of the box (the box being any number of things, themselves, the tv, our family…). What did I do? I know that you are dying to know…right?! Ok, maybe not dying, but you have to be at least mildly interested or else you wouldn’t be reading this.
I decided that an epic battle, such as the one that I was about to undertake, requires some planning, some fun and maybe even a teeny bit of bribery. (I am not above buying my children when necessary.) It was going to have to be big and it was going to have to be awesome and it was going to have to be Hough-sized. To come up with my plan, I did what any good mom does, I logged in to pinterest! After hours (literally hours, I am not even kidding.) I decided that we were going to have ourselves a good old fashioned summer camp. One of the (many) benefits to having a heap of kids is that we have our own summer camps’ worth of campers right here. Allow me to introduce:   CAMP HOUGH! I know that the name lacks originality, but come on people! I can’t make everything awesome. Each week we learn about a different saint. A few crafts, games and activities have to do with that saint. We also plan a few pool days each week or some other fun “out of the house” activity. All of this is fun, but my favorite part is the fact that at 10:00 each morning all electronics are turned off. We have an ipod, kindle, tv free day. My campers turn on their noggins instead. This is what happened today….
Camp Hough Tent City!

I gave them a few sheets and blankets and they used my redneck clothesline and Voila!!! They did a great job! 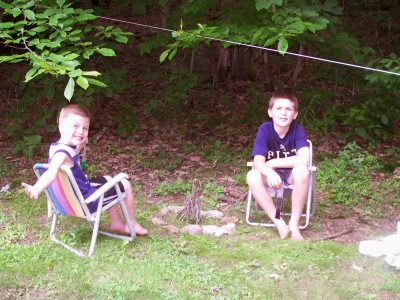 Isaac and Aiden around their “fire.” 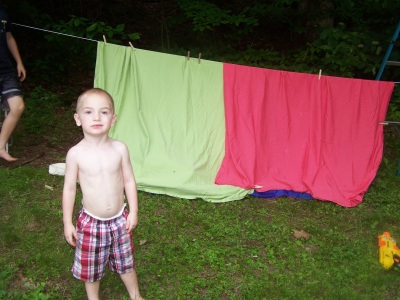 Peezy in front of his and Isaac’s tent.

Gianna in her and Noah’s tent

What a weirdo! LOL 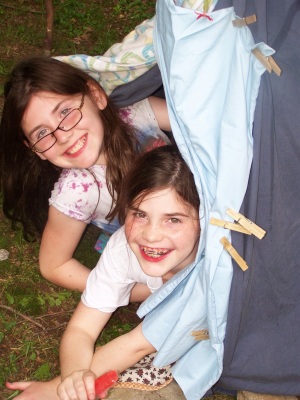 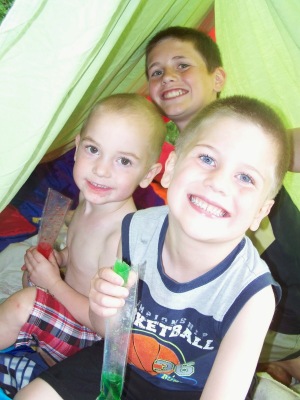 The fire ring minus, the fire of course
These kids spent all day outside playing in their tents…together…without…FIGHTING!?!?! What the farkle? Camp Hough was a huge success today! And my kids are awesome and I like them a lot today too. 🙂